Do you have an Agilent 33220A function generator? If so, you may well have experienced an annoying problem where the control knob does not operate smoothly – the number on the display doesn’t change when the knob is turned, changes erratically, or even changes in the wrong direction! Well, this is actually a very easy fix if you follow the steps outlined below.

Most of the test equipment repair articles on this site are intended for technicians and engineers with fairly advanced skills. They demand advanced troubleshooting, surface mount soldering, reverse engineering, or other skills that can take years to master. However, this article is an exception. Anyone comfortable with a screwdriver should be able to follow these steps and repair their 33220A, saving hundreds or thousands of dollars in the process. For reference, an example of the Agilent 33220A 20MHz function generator is shown in Figure 1 below. These steps should also work with other generators in this same series such as the Agilent 33250A 80MHz function generator and the same idea should work with a wide variety of other instruments utilizing similar encoders. 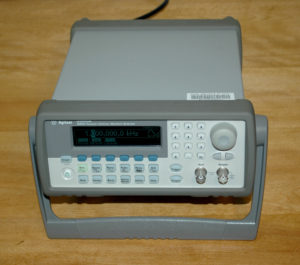 Before you begin, you will need:
A T20 Torx screwdriver – I recommend a Wiha® 36278. Order here.
Caig® DeoxIT FaderGrease #DFG-213-8G. Order here.
A small flatblade screwdriver such as a Wiha® 26040. Order here.
At least 90% isopropyl (rubbing) alcohol. You can buy this from your local drugstore.
Cotton swabs. Again, buy from a drugstore.
Toothpicksfor applying the FaderGrease. Again, any drugstore. 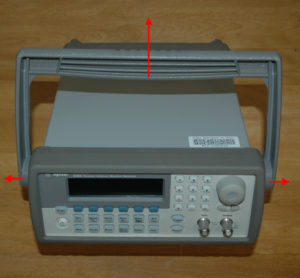 Figure 2: Remove the handle by rotating it into the position shown and then pulling in the directions of the arrows. 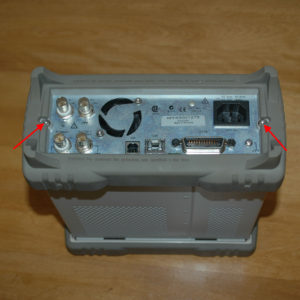 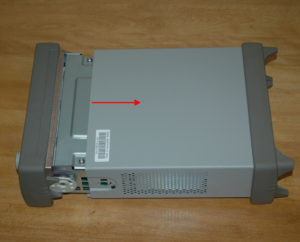 Figure 4: Remove the case by sliding it in the direction indicated by the red arrow.

Step 3: Remove the internal shield
After removing the outer case, the internal shield needs to be removed to expose the mainboard. Remove the two T20 Torx screws indicated by the red arrows in Figure 5, then lift the shield off of the instrument. It will still be attached by wires. Do not attempt to disconnect them, just lay the shield assembly to the side of the instrument as shown in Figure 6. 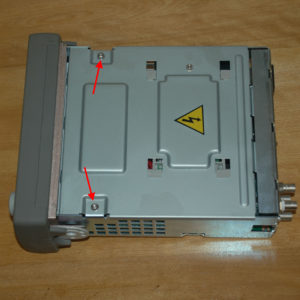 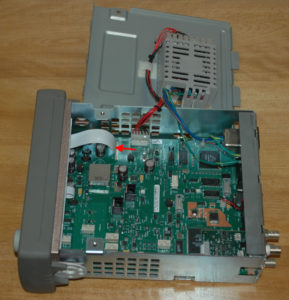 Figure 6: Set the shield assembly down by the side of the instrument as shown. The red arrow indicates the location of ribbon cable J201 which should be removed by pulling it straight up from the main board. 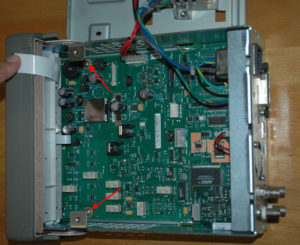 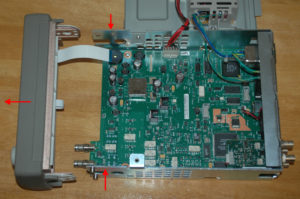 Step 5 – Disassemble the front panel
The first step in disassembling the front panel is removing the plastic board retainer. Loosen the T20 Torx screw indicated by the red arrow in Figure 9, then remove the retainer by lifting it straight up. Note that the screw is captive and need not be removed from the retainer after loosening. Take care not to catch the ribbon cables on the retainer as you free it. 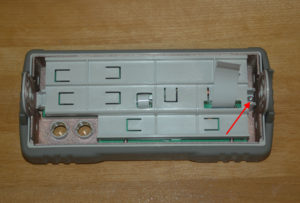 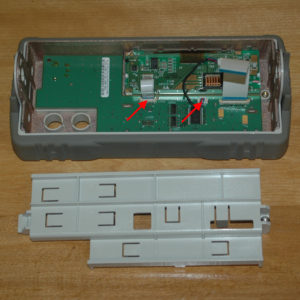 Figure 10: Remove connectors J102 and J103, indicated by the red arrows, by pulling them straight out of the front panel board.

With these steps completed, you can now lift the front panel board out of the panel. Figure 11 below shows this board removed. 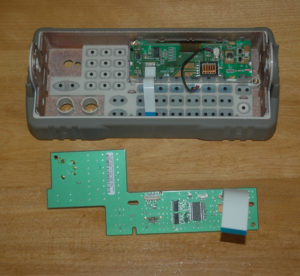 Step 6 – Dismantle, clean, and lubricate the encoder.
Finally, the generator is disassembled to the point that the actual repair can be performed. Using the small flat blade screwdriver, bend the four tabs holding the encoder together away from the encoder body as indicated by the red arrows in Figure 12. When complete, the tabs should look like Figure 13. 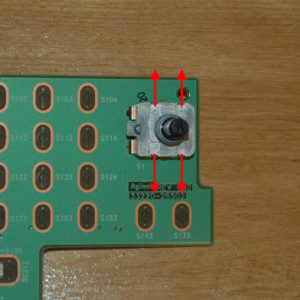 Figure 12: Bend the tabs away from the encoder body as shown by the  red arrows. 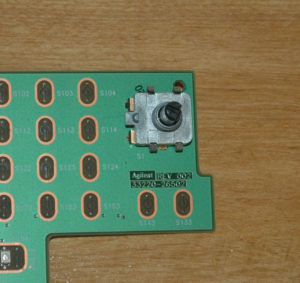 Figure 13: With the tabs properly bent, the encoder should look as shown.

With the encoder tabs bent as shown, remove the body of the encoder by pulling the shaft away from the board. Turn the encoder body over and clean the points indicated in Figure 14 of all dried grease using isopropyl alcohol and cotton swabs. Be careful not to bend the delicate encoder contacts. On the other hand, the encoder wheel should be thoroughly and somewhat aggressively cleaned to rid it of all dried grease. If you do bend a contact, carefully straighten it again with the flatblade screwdriver or a toothpick. The contacts, when properly bent should make firm contact with the encoder wheel. With all the old grease removed, liberally apply the DeoxIT FaderGrease to the contacts and encoder wheel. I recommend using a toothpick for precise application. Do not apply the grease with a cotton swab as cotton fibers will contaminate it and may cause intermittent operation. 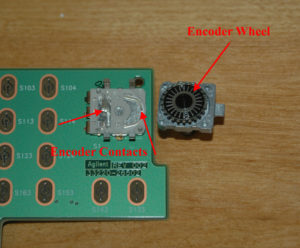 Figure 14: Clean and lubricate the points indicated by the red arrows. 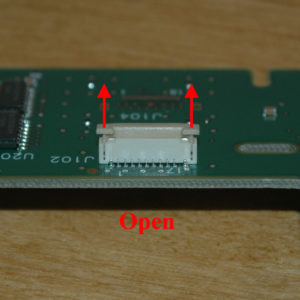 Figure 15: Before inserting the ribbon cable, open the connector by pulling in the locations indicated by the red arrows. 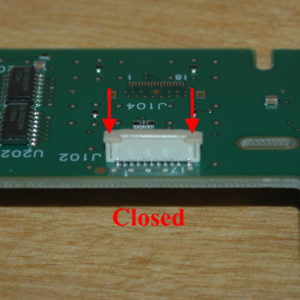 Figure 16: After inserting the ribbon cable, close the connector by pushing in the locations indicated by the red arrows.

Concluding Remarks
Although this process may seem complicated, it is actually quite quick with a bit of practice. If it is any indication, I can do one of these in about 15 minutes. With heavy use the process may have to be repeated every few years, but the DeoxIT FaderGrease should last longer in this application then the original grease. For other problems with this generator, the Agilent 33220A service manual is actually quite good and contains a complete parts list and schematics. Quite a rarity for any piece of test equipment this new. Good luck and have fun!

5 Responses to “Cleaning the encoders in Agilent 33220A Function Generators”